A big change is taking place: Covid-19, humans and nature

We are experiencing a great moment of change. Life is change. Nature changes constantly, as do we and our body. Plants know the law of change, adaptability and cooperation, but we cannot say the same for human beings.

For some months now we have been experiencing conditions of forced change. A change imposed by a virus, by something external to our will, which perhaps facilitates a process that, on our own, due to laziness and comfort we would not have chosen for ourselves.

These moments that off set our usual balance change many things-structures, priorities, and even values. What before seemed obvious, now is not. What has always seemed important to us, may now be futile. If before on our scale of values health, self-sufficiency, solidarity were not at the top, now perhaps they are conquering a new position. Will all these current world events be useful?

Right now it’s up to us to choose to see the glass half full or half empty.

At the time of this blog’s publication we are in the season of Spring, and thanks to the quarantine we are locked up at home with the possibility to observe on the internet various testimonies of how nature is breathing in a new way.

“When sea traffic is significantly reduced,” explains biologist Valentina Braccia, “sea creatures, especially cetaceans, benefit from it. Noise pollution caused by maritime activities, together with chemical pollution, represents one of the main threats to dolphins and whales. “Maritime traffic in the Mediterranean continues to rise.” From 2002 to today – underlined Braccia – it has almost doubled. With a growth rate of 3/4% per year”. This emergency that has stopped many human activities is good – at least – for the ecosystem.

The water of the canals of Venice have become so clear that schools of fish can be observed with the naked eye. Even dolphins have returned to the silent ports of Trieste and Cagliari in Italy, just wild boars have been seen in the center of Sassari. 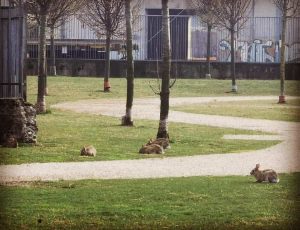 In the deserted streets of Milan hares have been spotted reclaiming possession of their natural habitat. People are not seen in the city, the streets are empty and silence reigns, broken occasionally by ambulance sirens and few sporadic cars.

Meanwhile, satellite images also show a significant drop in pollution levels during this quarantine time. A new analysis, released by BBC conducted by researchers from Columbia University of New York, confirms that air pollution levels have dropped in areas of the world where the spread of Covid-19 is greatest, including China to Northern Italy.

Satellite photos of NASA and the European Space Agency (ESA) have already shown this several times. Both China and Italy have lost much of their gray coat, made of fine dust, carbon dioxide and nitrogen dioxide.

Due to the aviation blockade and millions of people working from home, emissions are expected to drop in other countries of the world that are now more affected by the virus.

Although people working from home are likely to result in greater use of home heating and electricity, the containment of commuters and the general slowdown of the economy will likely have a positive impact on emissions.

Nature is always here and responds to human needs. One positive side to this situation has been the decrease in pollution for her to respond in gratitude, “here I am, I am here, take care of me too”. Who knows, perhaps everyone will come out of this Coronavirus emergency improved, finally aware of the universal value of health, both for mankind and for nature too.