A Birch tree in the Twilight Zone

I had just connected my first young birch tree to the device and I was playing some cords. I found out a series of cords that the birch tree would easily follow. I was puzzling in my mind with songs I knew, trying to find out a song the tree would be able follow. Very soon I thought of Twilight Zone by Golden Earring. If I would play it 1 tone higher then the original song key, it would match the cords the plant knew. I sang it an octave lower and this was the result that came within minutes:


This record was made just before the tree dropped his leaves. It takes some patience, and many cold days and nights, before I can try again and make a better version of this….
But making music with plants, to me, is a new world opening up. It resonates with the definition of Twilight Zone, as defined by Rod Serling,

Hope to be able to come up with some new and better recordings this summer… Marcel Bakker, Netherlands 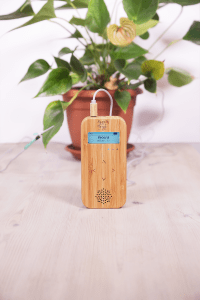 FIND OUT HOW TO COMMUNICATE WITH THE PLANT WORLD!