We all know that children more easily relate to the plants, trees and all that lives in nature than grown-ups. All of us have learned to question at some point in our lives wether things were ‘real’ or ‘imagination’. Many of us are now trying to un-learn this bad habit of questioning our perceptions. For this reason I started working on a project for schools with the Music of the Plants. For children of all ages. And it is striking that the older children don’t even believe that the music they hear is really created by plants. I have heard the older children say. ‘Yes, nice performance for the kids from the Kindergarten, but we know of course this is not true!’ 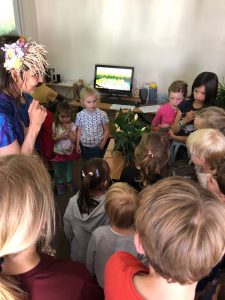 And so it happend that Early June, 2022, I traveled to Paris for a project with the Music of the Plants (see also the blog ‘Allô, la Terre?). Through friends of my country of origin, The Netherlands, I connected to the Dutch School in Paris where we set up a presentation with music, storytelling and experience for about 100 children between 5 and 14 years old. Since ‘a device of the music of the plants’ isn’t really a catchy description that triggers the imagination and curiosity of young children, I used a different term: ‘Flower Telephone’. I wrote a story about Tomas and his reawakening abilities to communicate with plants, and I read them the story of ‘Tomas and the Flower Telephone’, with songs, images and of course: live flower music!

Magic happened. Or at least, we were all clearly testimonies of the hidden reality of plants that we – even plant intelligent ‘die-hards’- sometimes forget really exists. The flowers responded precisely on the children’s attention. At first the beautiful Cyclamen was a bit shy. When I explained the children that we should give something, before asking something from nature, they were all ready to sing a song for her. We sang the theme song of the story together and Cyclamen surprised the children with her – at first – careful song, which later developed in a melodic musical performance. Every now and then she paused, after which the children immediately said to each other to sing again, or clap their hands, or praise her beauty. Cyclamen responded every time again. Also the teachers were visibly put off guard. 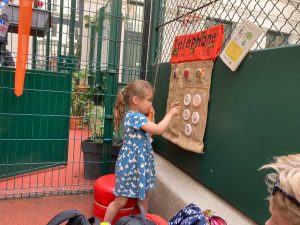 ‘I want a Flower Telephone!’ This is what one of the children kept on saying to her mum, I heard later, after the performance. Her mum hadn’t been present and of course she thought that a flower telephone was something like a phone case or a new marketing add for a smart phone.

I think that might be a way to go.. we can help reawakening our nature consciousness through learning from our children. And every now and then our children can use some help too, to not forget about what they already know.

For more information about school projects about nature intellgence and the project Tomas and the Flower telephone, see: www.voiceandplantmusic.com 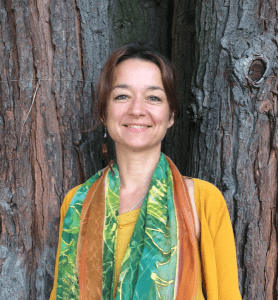